*THIS EVENT HAS BEEN RESCHEDULED FOR THURSDAY, APRIL 20TH DUE TO INCLEMENT WEATHER*

Harry Haskell will present his novel, Maiden Flight, as part of the Delicious Discussions Author Luncheon Series (a partnership between the Otis Library and Bank Square Books) at Michael Jordan’s Steak House at Mohegan Sun on Wednesday, March 15, from 12 – 1:30 p.m. Tickets are $40 and include lunch, dessert, a paperback copy of Maiden Flight and author signing. Reservations are required. To purchase tickets, contact Kate McDonald, Development Manager at (860) 889-2365 or kmcdonald@otislibrarynorwich.org or visit: https://www.eventbrite.com/e/delicious-discussions-with-harry-haskell-maiden-flight-tickets-31972871720

Today, I’m honored to be joined by Connecticut’s own Harry Haskell.

Harry is the author of Maiden Flight (Chicago Review Press)—a novelization of the life of little known “Wright sister” Katharine. The grandson of Henry J. Haskell, husband of Ms. Wright, he previously published the books Boss-Busters and Sin Hounds: Kansas City and Its Star, The Early Music Revival: A History, and was editor of The Attentive Listener: Three Centuries of Music Criticism. A former acquiring editor for Yale University Press and classical music critic for the Kansas City Star, Harry now works as a free-lance book and journal editor and serves as program annotator for Carnegie Hall and the 92nd Street Y in New York. Harry makes his home in Guilford.

“Haskell imaginatively makes what was already an interesting triangle even more emotionally gripping. This slow burn of a story draws readers in more deeply with each page and makes Katharine truly the most intriguing Wright of them all.” —Booklist

“Masterfully drawing on intimate family letters, Haskell crosses the boundaries of fact and fiction to bring to life the distinctive voices of an era and illuminate one exceptional woman’s struggle for independence and fulfillment.” —Lauren Belfer, author of And After the Fire

“Combining family lore with meticulous historical and biographical research, Haskell has crafted a lively tale of the forgotten Wright sibling. While very much of its era, the recounting of family relationships, love coming late in life, and the excitement of new technology reverberates in our own time as well.” —Tracy Barrett, author of Anna of Byzantium

Maiden Flight is the true-life story of the Wright sister who in 1926 left her world-famous and intensely possessive older brother to marry newspaper editor Harry Haskell, the man she loved, and suffered the unhappy consequences. An international celebrity in her own right, Katharine embodied the worldly, independent, and self-fulfilled New Woman of the early twentieth century. Yet she remained in many ways a Victorian. Torn between duty and love, she agonized for months before making her devastating break with Orville at age fifty-two.

Cast in the form of three interwoven first-person memoirs, Maiden Flight is imaginatively reconstructed from personal letters, newspaper reports, and other documents of the period—in particular, Katharine’s lively and extraordinarily revealing love letters to Harry. In allowing Katharine to step outside of Wilbur and Orville’s shadow, it sheds new light on the central role she played in their private lives, as well as on her often misunderstood contribution to their scientific work. Above all, Maiden Flight celebrates Katharine’s abundant store of what she called “human nature”—her lively and perceptive outlook on life, her great capacity for both love and indignation, and her acute and sometimes crippling self-awareness. 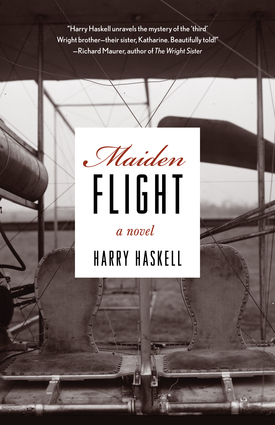 John Valeri: What inspired you to write Maiden Flight – and how did your personal connection to the subject matter influence the process?

Harry Haskell: As my step-grandmother, Katharine Wright Haskell has been part of our family history and lore as long as I can remember. I always knew about the love letters she wrote to my grandfather in the 1920s, but it wasn’t until I began researching a book about his era at the Kansas City Star that I took them out of their archival folders and actually read them. It was then that I realized what an extraordinary person Katharine was and decided that I had to find a way to tell her story, preferably in her own words. It’s a story that still resonates powerfully today, particularly during Women’s History Month in March.

JV: Tell us about your real-life protagonist, Katharine Wright. In what ways did her relationship with her brothers, Wilbur and Orville, define her – and how was she able to eventually forge her own identity?

HH: Until quite recently, Wright biographers tended to depict Katharine as Will and Orv’s loyal helpmate, the one who kept the home fires burning while they were out making history. That’s true as far as it goes, but the real-life Katharine was much more than an appendage of her famous older brothers. She had always had an excellent mind of her own, as their widowed father recognized when he sent her to Oberlin College and encouraged her to pursue a career as a high school Latin teacher. For a long time Katharine found her life as the “Wright sister” stimulating and satisfying. But after Wilbur died in 1912, it gradually dawned on her that she was a modern women who wasn’t dependent on Orville for a sense of identity and self-fulfillment.

Katharine and my grandfather, who was also called Harry, met as undergraduates at Oberlin in the 1890s. They were clearly smitten with each other—in one of her letters, she says she would have married him then if he had popped the question–but as fate would have it, Harry was already “spoken for.” Twenty-five years later, my grandmother’s death unexpectedly opened the door for them to fall in love all over again. Their late-life romance was a dream come true for Katharine. For Orville, however, it was a catastrophe. Having already lost his beloved brother and scientific partner, he couldn’t bear to lose Katharine as well. So he cooked up a story that she had agreed to remain single as long as he was alive. As much as Orv liked and admired Harry, he saw his sister’s engagement as an act of betrayal.

The emotional toll that Orville’s attitude took on Katharine was devastating. He stopped talking to her, refused to attend her wedding in Oberlin, and returned her letters unopened after she moved to Kansas City. All of this, and much more, is recorded in the letters she wrote to Harry between the time his first wife died in September 1923 and her reluctant decision to elope with him three years later. The Katharine they reveal is a complex, acutely self-aware, and magnificently human figure—a bright, brave, passionate woman who followed her heart and suffered the unhappy consequences.

JV: This book is a novelized version of true events. Why did you choose to use the lens of fiction – and how did you endeavor to balance fact with creative license?

HH: I realized early on that I couldn’t simply reprint Katharine’s letters and expect her story to make sense to readers, let alone capture their attention. Like most of us, she has a tendency to run on and repeat herself. Her letters are full of flashbacks and flash-forwards, as she reminisces about her experiences in Europe with “the boys” before World War I, or fantasizes about moving to Kansas City as Harry’s wife. She agonizes, at sometimes tedious length, over the necessity of choosing between Harry and Orville, the two men she loves most in the world. Above all, she worries obsessively about her brilliant but emotionally vulnerable older brother and what her marriage to Harry will mean for him.

Having rejected a documentary approach, I cast about for a way of making Katharine’s words speak to other people as vividly as they did to me. My solution was to extract the pithiest passages from her letters (and other contemporary documents) and stitch them together with a small amount of connective tissue of my own invention. The publisher chose to market the book as a novel, but it’s really creative nonfiction–a medley of imaginatively reconstructed first-person memoirs spoken by Katharine, Orville, and Harry in turn. Thanks to Katharine’s letters, almost every word she uses in describing her belated “maiden flight” into the uncharted realm of romantic love is her own. For me, and I hope for others, this authenticity makes her story especially moving and compelling.

JV: There’s an epistolary element to this work in that it includes personal letters, newspaper articles, and other documentation. How did these items play into your own understanding of the story – and in what ways do they enhance the narrative?

HH: I’m a historian by temperament and training, so in all my books I start with the sources and build my stories around them. In this case, the documentation was enormously rich in some respects, but spotty in others. For instance, only Katharine’s love letters have survived; at some point my grandfather’s side of their correspondence mysteriously disappeared. We do have other letters, of course, hundreds of them, both from the period Maiden Flight focuses on and from other chapters in the Wright family saga. Piecing this first-hand testimony together made it possible to reconstruct Katharine’s story in fine-grained detail. It also provided multiple perspectives on many of the events I recount, which gave me the idea of structuring the narrative as a set of interlocking memoirs.

Given my personal connection with two of the protagonists, though, writing Maiden Flight could never have been a purely historical exercise. After immersing myself in the source material for a while, I had the experience that many novelists describe of being taken over by my characters, to the extent of almost literally hearing their voices. In any case, reconstructing Katharine’s story didn’t require a huge leap of imagination. I was born in the house in Kansas City where she and Harry lived. In Dayton, I paced off the distance between Orv’s bedroom and the room down the hall where they “spooned” discretely while he was asleep. So even though I took some creative license in telling the story, the bottom line is that every incident, fact, and emotion that the three characters describe is either explicitly documented or can be plausibly inferred from the historical record.

JV: In your opinion, what is the role of the bookstore within its community – and how might attending author events benefit the reader/writer/bookseller relationship?

HH: For me, one of the most satisfying aspects of writing books—which, let’s face it, is a pretty lonely occupation–is the opportunity to meet readers (and potential readers) in person at talks, signings, and other author events. And of course bricks-and-mortar bookstores—particularly the independents, whose numbers are thankfully on the rise once again—are key to making that kind of interaction possible. Libraries too—we mustn’t forget them. At the end of March I’ll be going back to Dayton to participate in a community-wide “Big Read,” where the whole city focuses on a single book–in this case, David McCullough’s fine new biography of the Wright Brothers. My appearance is sponsored by Books and Company, a wonderful indie bookstore, and the Wright Memorial Public Library. Like any author, I hope to sell a few books, but mainly it will be a great opportunity to share Katharine’s story with folks in her home town. Isn’t that what it’s all about?

With thanks to Harry Haskell for his generosity of time and thought and to Elissa Englund, Event Coordinator at Bank Square Books / Savoy Bookshop & Cafe, for facilitating this interview.

Visit me online at
www.johnbvaleri.com
Where the words get in the way ...