Today, I am joined by Brooks Wright.

Brooks is the author of the recently released short story collection, The Sky Is Far Away (Blurb). Born in New York, he moved to Kansas City as a kid and became a professional drummer at age 14. After a lengthy musical career, performing with the world’s top jazz musicians, Brooks decided to go back to school. He graduated from Salem State College with a bachelor’s degree in English literature and philosophy. His novels include Yellow Sky, Under the Bo Tree, Now I Say Goodbye to You, and The Hundredth Year. His work has appeared in The Larcom Review, The Sewanee Review, and Soundings East.

Praise for The Sky Is Far Away:

“It isn’t often that a reader finds a volume of short stories as satisfying as THE SKY IS FAR AWAY. Each story is a polished gem. That’s not to say that the characters populating these pages are shiny and unflawed. In our world, where we are constantly seduced by glamour and glitz, how refreshing to find an author committed to introducing us to people realistically dealing with the hand they were dealt without apology for their humanness. In that realness these characters touch us all. Do yourself a favor and get to know them.”—Amazon reviewer Carolyn Brewer

“Extremely beautiful, yet unpretentious, these stories of disparate characters explore with stark precision the human longing and extreme effort it takes to find one’s way in the world. Realism at its most uplifting. Definitely worth reading!”—Amazon reviewer Avid Reader

The characters of author Brooks Wright’s collection of short stories inspire empathy and pack a punch in his new short story collection, The Sky Is Far Away. Eclectic and compelling, Wright’s stories explore the courage and pathos of his characters in their struggle against an indifferent world.

In The Sound of Glass, a boy without a dad throws a rock and winds up working in the fields, alongside migrant farmers, picking celery for a week. Bending under the hot sun, his blisters open up, the color of watermelon and run like tears. In The Good Man, a mother misses her old son even as she embraces the new version, who returns home from Iraq with an amputated leg. In Mr. Tiddlywinks a daughter hates her mother’s smile.

Written over the course of 20 years, Wright’s stories are diverse yet connected. Themes of families and parenting dominate. His characters strive for dignity, whether he’s writing about taking chances, an imminent death, or a young girl’s passion for unicorns. His stories linger. 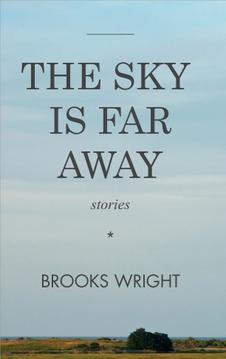 Now, Brooks shares the long and short of his stories …

John Valeri: What inspired you to collect your short stories in The Sky Is Far Away – and, given that it’s the culmination of twenty years’ work, how do you view it as marking a progression of your style?

Brooks Wright: Well at some point I realized it was not going to happen unless I did it myself. It’s hard to acquire an agent or publisher for this kind of writing. I wanted to have my stories in a book form so I could give them to friends and family. Plus it’s become more acceptable these days to go the do-it-yourself route both in music and in writing so I just went ahead with it. Since they were written over a twenty year time period there is no intentional thematic design at work here as a collection; I simply picked these twelve stories for what seemed to me the best stories out of the seventy I’d written. I also took the advice of my editor as to which of the stories in the group that I had given her, not to include. In terms of progression of style I’d say it’s more a matter of simply getting better at my writing and just refining whatever style I might have in general, which is not so singular, as the style tends to reflect the individual character and narrative of each story and their respective voices and subjects and tone.

JV: The stories are eclectic in terms of tone and subject. What do you see as the unifying theme(s) – and how can they be appreciated both singularly and collectively?

JV: You have written several novels in addition to these shorter works. How do the disciplines compare and contrast – and what tells you which format an idea warrants?

BW: The main difference between the short story and the novel is scope. While there are always exceptions in everything, as a general rule a short story as a form is an expression of a single momentary change, say that of making a critical decision involving a single main character, and is thematically more personal. The novel is more an evolution over time where the changes are external (meaning social) and involve a greater development of plot. There may be more than one main character with opposing points of view. The short story is more the expression of an internal shift in feeling and thought and most often has a single plot. Some short stories have ambitions of their own and want to be novels, in which case it’s best not to argue, but it’s always hard to know. I usually start with deciding which form I’m working in first but with creative work it’s best to be flexible. It’s not engineering, after all, which usually has a fixed purpose that’s non-negotiable. Art serves a purpose but it’s less pragmatic and therefore has a much greater freedom.

JV: Please share with us your experiences with self-publishing. What are the advantages and disadvantages – and are there best practices that you would encourage others to follow?

BW: Self-publishing first of all is a lot of work. You have to do everything yourself (except the actual printing, of course) and have no one else to rely on besides people you have hired to help. But the decisions and most of the labor are all yours. That said, you have more control along with the responsibility. I would strongly advise finding an editor to edit your work and have several readers respond with their critiques. The work should be given plenty of time to simmer, especially in the initial revision process, which should be extensive. The disadvantages are two: marketing and distributing. A traditional publisher will market your book and distribute it for you and set up book tours, etc. Publishers will see to it that you get reviews and endorsements. When you self-publish you are on your own and hiring a publicist can be expensive. Some self-publishing venues will distribute your books but that doesn’t get them on store shelves or in libraries. You need some kind of branding for that, as in endorsements and or distinguished prizes and awards. Famous authors won’t endorse or review your work and publications won’t feature it (this interview being the exception, of course). Literary Festivals won’t include you on their programs. If you write Harry Potter or Pilates the Easy Way or How To Outsmart The Stock Market In Five Easy Steps you may well be able to create your own large following. If your work has that kind of popular appeal and you do a proper job of it then your book can take off by word of mouth, especially now with social media, and you might get picked up by traditional publishers and agents. If you are somewhere on the vast spectrum of Literary Fiction, as I am, then chances for that are very slim. I would advise that self-publishers do their homework regarding their choice of self-publishing venues. Many of them result in a very poor product and little to no help. I was lucky and happened to have an online book publisher, Blurb.com, recommended to me that produced an excellent product although the software was not the easiest to use in the process for downloading and formatting the book. Their call center was helpful if you got the right person, which I usually did.

JV: Leave us with a teaser: what comes next?

BW: I have been writing for thirty years so have completed more than a few novels and short stories. Consequently, I have at least three novels that are next in line for publication and a mystery (that I almost sold to a publisher over the transom, by the way, but I hadn’t published anywhere at the time so they didn’t want to take a chance) that I need to dust off and redo for possible publication. This spring I hope to release Now I Say Goodbye To You a novel that evolved out of a short story about a homeless man in the aftermath of the 2008 economic and housing collapse who inadvertently becomes involved with a young, pre-teen, runaway girl who has suffered a traumatizing event and insists on following the man around despite his wish to remain alone and unattached. After that I have a novel, Yellow Sky, based on the photographs my father took of the Ringling Brothers, Barnum & Bailey Circus in 1934 when he and my mother followed them around the Midwest and took pictures behind the scenes of their daily life. And I am working on Laughing Boy, a memoir of my brother who happens to be one of Diane Arbus’s most famous subjects and who led a tragic life, dying at the age of 41. And then there are the new projects I have started, which at the moment are circling the airport in a holding pattern and waiting for permission to land.

With thanks to Brooks Wright for his generosity of time and thought and to Skye Wentworth, Book Publicist, for providing this interview opportunity.

Visit me online at
www.johnbvaleri.com
Where the words get in the way ...